Use code NEWYEAR22 to get 25% off your purchase of a Revibe Connect with an annual membership!

A Brief Overview of Research Conducted to Date

The First Study used trained observers to compare the behavior of 21 students (grades 3-8) before and after the use of Revibe, in order to analyze the efficacy of vibration reminders to improve on-task behavior. (Fall 2015)

The Second Study was funded in part by the U.S. Department of Education and conducted by a third-party research group with 50 students (grades 3-5) in a mock classroom laboratory, and 29 students in real classrooms during school hours in order to explore efficacy in a real-world setting. (Summer 2017)

The Third Study was based on a subset of data from our user database to evaluate efficacy in real-world applications. Portions of this research have been presented at scientific conferences including the American Academy of Pediatric Neuropsychology (April, 2020), The ADHD World Congress (May, 2021), and the CNS Summit (November, 2021).

All data has been de-identified to protect the privacy of our customers and study participants, as well as the security of our data. Results may vary across users, settings, etc...and do not imply or suggest any performance claims about Revibe. Revibe is not intended to diagnose, treat, cure, or prevent any disease.

We would like to thank the following individuals and organizations for their participation and funding of this research:

A three-month pilot study was conducted in order to: a) provide data on the changes in on-task behavior with Revibe, b) measure to what extent (if any) habituation occurred while using Revibe, and c) observe any adverse effects of Revibe (increased distraction, annoyance to the wearer or their classmates, skin irritation, etc.)

The study was conducted at two sites (a charter elementary and charter middle school in North Carolina). There were 21 children (17 boys and 4 girls) in grades 3-8 who participated. All students were evaluated at the beginning of the study to establish a baseline for their on-task behavior. Nine of the 21 students displayed on-task behavior for a majority (more than 90%) of the time and were therefore excluded from most of the analyses since their level of on-task behavior was already deemed as proficient. It was noted that the use of Revibe for children who did not need it did not produce any significant negative or deleterious effects in on-task behavior. The 12 evaluable test subjects who had demonstrated difficulty staying on task during the initial baseline remained. While Revibe is not intended to diagnose, treat, cure or prevent any disease, it was noted that prior to the study, six of the 12 students had been diagnosed with ADHD or Autism Spectrum Disorder.

Students were observed by third party research assistants (Ph.D students from School Psychology programs at the University of North Carolina at Chapel Hill and North Carolina State University, as well as practicing psychologists) in a 1:1 fashion in their normal classroom settings. Observation was limited to Core Classes (e.g., Math, English, Science and Social Studies). Each student was observed in only one classroom, at the same time of day, by the same observer. Research assistants used a specialized behavioral tracking software to record children as "on-task" (i.e., engaged in expected classroom behaviors, such as listening to a lesson or completing work) or "off-task" (i.e., looking about the classroom, staring at the floor, daydreaming, etc.) every 30 seconds during 30-minute observation sessions (an initial session, and 2-4 follow-up observations in the weeks after).

All data was sent directly to a third-party contract research organization (BioTechnology Transfer, LLC) for scoring and analysis. The study was cleared by the Heartland Institutional Review Board, an independent, third-party board that operates in accordance with human subject research standards established by the National Institute of Health (NIH). 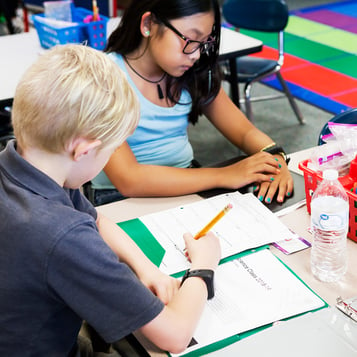 Several months after the observations were completed, teachers and students were all asked to give feedback about their experience with using Revibe by an unknown, neutral surveyor:

Once the prototype of the self-monitoring wristband device was developed, a student test group with 50 3rd-5th grade students was recruited to achieve the following goals: a) to ensure the device functions as intended, b) gather simultaneous behavioral observations and wristband sensor data to establish algorithms for intelligent modulation of tactile prompts, and c) gather input from students to guide the selection of the type and content of gamified rewards, finalize design specifications for the wristband, and gauge overall perception. We collected behavioral observations and sensor data during four different academic and play activities, which were then used to establish initial algorithms for intelligent modulation of tactile prompt schedules. We also gathered student feedback via pencil-and-paper ratings and qualitative discussion groups to finalize wristband specifications, establish the design and game mechanics for the online gamified rewards systems for students, and measure overall perceptions of the product.

To participate, students had to a) be in 3rd-5th grade (7-11 years old), b) experience significant deficits in self-regulation (defined as a score of at or above 5 of the Activity Level subscale, at or below 3 on the Attentional Focusing subscale, at or above 5 on the Impulsivity subscale, or at or below 3 on the Inhibitory Control subscale of the parent-report Child-Behavior Questionnaire-Short Form; CBQ-S), c) attend a regular education classroom for at least 40% of the school day, d) be English language proficient, and e) have parent permission to participate.

Overall, students were very positive about the usability of the self-monitoring wristband device. Representative comments about the prototype included:

Students commented that they would be motivated to wear the wristband while at school and at home. Representative reasons for why included:

In order to participate, teachers needed to teach students in grades 1-5 and commit to using Revibe with at least one student for a period of two weeks. Of the eligible and selected participants, 26 teachers participated (M age = 36 years; 25 female; 88.5% Caucasian, 3.8% African American, and 7.7% declined to report race/ethnicity; 1-16+ years of experience, with the average participant reporting approximately 10 years of experience). After consenting to participate, four teachers withdrew from the study (two reported personal events that prevented them from having the time to participate and two were unable to receive parent consent). Teachers were asked to identify at least one student to participate in the study with them. To participate, students needed to be enrolled at a participating school, in grades 1-5, and have parental permission to participate. 29 students participated (Mage = 9 years; 23 boys; two 1st graders; eight 3rd graders; six 4th graders; thirteen 5th graders; 56.7% had a parent-reported ADHD diagnosis; 46.7% on medication; 56.7% Caucasian, 23.3% African American, 10% more than one race, 3.3% American Indian or Alaska Native, and 3.3% declined to report race/ethnicity). To ensure that responses were not reflective of practices and policies of one school or type of school, five different schools in NC participated (two charter, two public, one alternative educational program).

During the trial, students received personalized prompts over the course of their school day and self-recorded on-task vs. off-task behavior by tapping the device screen (2x or 1x, respectively). The software tracked the timing and number of prompts, self-recorded data, and activity sensor data. At the end of the trial, students provided qualitative comments and quantitative ratings on a Likert-scale in the following areas: a) comfort, b) attractive, c) distracting, d) stigmatizing to wear, e) ease of use, f) clarity of prompts, g) value for self-monitoring, h) useful for helping stay on task, i) would want to continue to use in school, and j) would want to use for homework at home.

Before and after the trial, teachers rated their students’ Activity Level, Attentional Focusing, Impulsivity, and Inhibitory Control using the teacher version of the Child Behavior Questionnaire-short form (CBQ-S). Additionally, at the end of the trial, teachers rated each component of the Revibe as well as the overall product on a Likert-scale in the following areas: a) quality, b) value, c) feasibility, and d) utility. Teachers also rated the degree to which they would recommend Revibe to other educators and would want to use the product themselves following Phase II full development and testing.

The data collected from our customers has resulted in a large database of youth with focus and attention problems from which we can evaluate the efficacy of Revibe in real world samples. To explore efficacy, we randomly drew a subset of users between the ages of 6 to 18 years of age and explored changes in Focus Rate and Attention Span (metrics provided by the Revibe device based on self-report data from users) after one week, two weeks, and three weeks of wearing Revibe Connect. Results were explored for the whole sample (N = 1,646, 71% male) as well as by age and gender (age 6-11, n = 1,015, 70% male; age 12-18, n = 631, 72% male).


Results were further explored for a subsample of individuals with a parent-reported ADHD diagnosis (n = 706, 77% male, age 7-18 years, M age =11.5, SD = 2.02. For this subsample, individuals had a minimum of two days of weekday (Monday to Friday) usage per week for three consecutive weeks, excluding summer months (July, August) and Winter holiday (last week of December and first week of January), to increase the likelihood that the usage period included time spent attending school. In summation of our research to date, while Revibe may not be a tool for everyone, it did appear to help many students improve on-task behavior in these discrete studies:

Please remember, Revibe is not intended to diagnose, treat, cure or prevent any disease. Each child’s case should be handled individually to accommodate their particular needs.

For any questions, or for more information including special offers for schools, please emailsupport@revibetech.com.